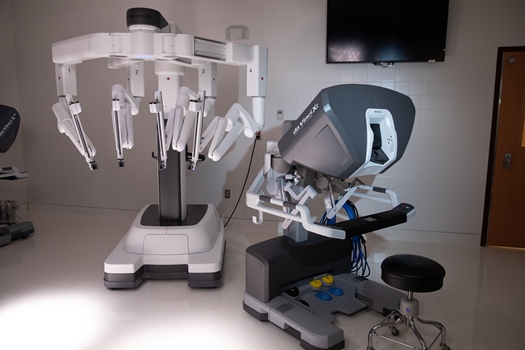 The Next Frontier in Minimally Invasive Surgery

Although it might sound like something out of “Star Wars”, robots are revolutionizing the way physicians perform gynecology, urology, prostate and general surgery, making it possible for patients to experience a shorter hospital length of stay and faster recovery time.

At South Florida Baptist Hospital, surgeons have been using the high-tech Da Vinci robot to help perform minimally invasive procedures for more than a decade.

Susan Musser, R.N., director of Surgical Services, explains, “The upgrade in technology provides surgeons with more functionality and makes it possible for us to add another level of complexity to the type of robotic surgeries we do here at SFBH.  Surgeons are able to perform minimally invasive surgery for many conditions that previously would have required more traditional open surgery.”

Robotic surgery has already become the standard of care for prostate, urinary and gynecological cancer, and the technology is now changing the way general surgery is performed.  Conditions ranging from colorectal cancer, diverticulitis and hernia repair to colon resection and anti-reflux surgery are benefitting from the use of robotics. Even some bariatric surgery is being performed with robotic assistance.

According to Dr. Hall, robotic technology advances minimally invasive surgery to the next level. It requires smaller incisions than traditional surgery, so there is less tissue dissection and less trauma to the body, as well as decreased blood loss. Patients have reduced swelling, which allows them to return to daily activities faster and with less pain.

“As the medical director of the SFBH Robotic Surgery Program, I have performed more than 500 general surgery procedures using this technology,” says Dr. Hall. “Only three other general surgeons in the Tampa Bay area have accomplished that goal.”

The robots aren’t actually performing surgery, of course.  The surgeon sits at a computer workstation in the operating room and manipulates the da Vinci system’s robotic arms to perform the surgery. The robotic arms serve as an extension of the surgeon’s hands and eyes.  Among the da Vinci Xi’s new features are four movable arms that can rotate in any direction, giving surgeons more flexibility and greater range of motion.

One of the biggest benefits of the da Vinci Xi is the access it gives general surgeons to the entire abdomen.  “We can treat multiple quadrants of the body, which allows us to do procedures we couldn’t do before,” says Dr. Hall.

The da Vinci Xi also offers sharper, 3-D high definition images of the inside of the body, up to 10 times greater than the human eye.  “The camera optics are unparalleled,” says Dr. Hall.  “It becomes much easier to identify vascular structures and avoid injury to adjacent tissue. The combination of outstanding visibility and greater access create a very precise surgery.”

The da Vinci Xi’s design, which integrates the operating table with the robotic technology, is more efficient and practical, making the procedure more streamlined and easier overall for the surgeon and the staff.   Dr. Hall points out that for patients, this means the surgery can be completed faster, shortening the time period they are under general anesthesia.

“Technology has changed our lives in unprecedented ways over the last decade, and we are committed to investing in the latest advances that improve the lives of our patients,” says Karen Kerr, SFBH president.  “The da Vinci Xi robot is an important new contribution to our expanding robotic surgery, which greatly benefits our Plant City community.”

“This is the future and it is very exciting that South Florida Baptist Hospital has acquired this new technology,” says Dr. Goldsmith. “It is definitely a game changer for total knee.  It improves our ability to create a well-balanced knee every single time for improved long-term clinical outcomes.”

Dr. Goldsmith points out that while traditional joint replacement will continue to offer patients consistently good results, the robotic-assisted Mako technology takes it to the next stage.  “This is not a different procedure, just robotic-assisted,” says Dr. Goldsmith.  “Using the robot addresses some of the concerns we had. It allows us to make extremely tiny adjustments that wouldn’t be possible with the human hand. That makes it possible for us to correct slight imbalances or rotations that could affect the outcome.”

One of the most significant advantages of the new system is the ability to “personalize the surgical experience for each patient,” says Susan Musser, R.N., director of Surgical Services.

The Mako robotic software allows the surgeons to “pre-plan” the procedure for a more custom-tailored, individual approach based on the patient’s specific diagnosis and anatomy. Using a CT Scan, a 3D model of the patient’s knee is created pre-operatively to help the surgeon map and plan the surgery.  That information is correlated with the Mako robotic system software, giving surgeons a detailed guide to follow during the procedure.

“The more information we have, the better the accuracy,” says Dr. Goldsmith. “We are able to confirm the anatomy and get feedback in real-time on where to operate. We can now balance the ligaments of the knee first using the robotic system and adjust anything prior to making the cut, rather than modifying anything after the cut has already been made.”

Susan adds that using the Mako robot also ensures a precise fit and placement of the new joint implant, which improves patient outcomes and satisfaction. “Patients are going home the day after surgery and they are recovering quickly with less pain and greater mobility,” says Dr. Goldsmith. “The Mako robotic system is a very precise, state-of-the-art technology. We are happy to offer it to our community.”