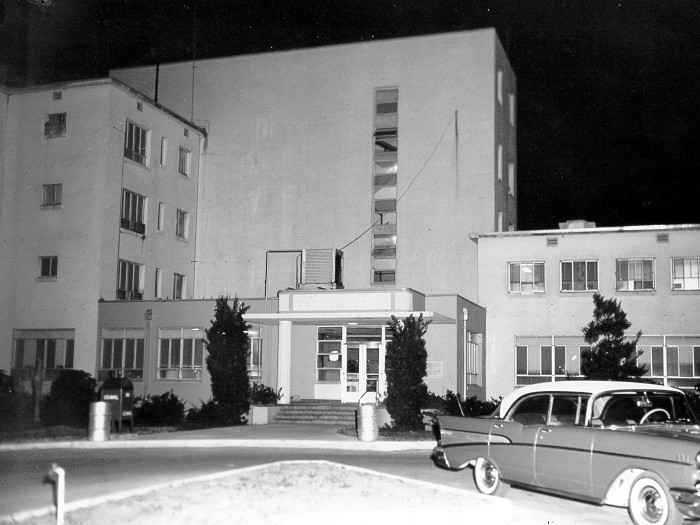 On December 29, 1953, South Florida Baptist Hospital opened its doors for the first time.  It was a milestone in Plant City’s growth and development. The hospital was small by today’s standards; just four stories and 100 beds.  But it was leaps and bounds beyond what had existed previously—a 10-bed clinic over Herring’s Drug Store, now the Whistle Stop Café at the corner of South Collins and South Drane Street, and another 13-bed clinic over White’s Central Pharmacy, now a retail shop at the corner of Reynolds and Collins Street.

Fast forward 65 years and SFBH has transformed from its humble beginnings into a state-of-the-art healthcare facility, offering the same level of patient care found in much bigger cities around the country. But throughout the decades, the hospital has managed to maintain the small town friendliness and personal attention that make patients and families feel appreciated and welcome.
Dub McGinnes is a well-known Plant City civic leader and philanthropist.  He’s also chairman of the SFBH Board of Trustees and proud of the journey the hospital has taken on its road to success.  “My father was among the Plant City leaders who were instrumental in creating South Florida Baptist Hospital,” said McGinnes. “When I drive into the hospital parking lot, I sometimes stop and think about my father smiling down on us.  He would definitely approve of how far we’ve come over the years.”

The Early Years
During a 65th anniversary open house for invited guests on Sunday, January 6, Mr. McGinnes reminisced about the hospital’s accomplishments, the challenges along the way and the decisions that changed the hospital’s history.   He noted that the first efforts to build a hospital in Plant City took place in the early 1940s with a donation of land by Rowena Mays and M.E. Moody.  But not until G. A. Leichliter, a Plant City minister, and his secretary, Mrs. Uldine Greene, took charge did the campaign move forward.  Finally there was enough momentum that civic clubs, businesses and churches began stepping up to help with fundraising efforts.  “First Baptist Church of Plant City had the hospital in its budget for years and made monthly payments to the hospital,” said McGinnes.

By 1953, the hospital was built and ready to admit its first patients.  The years following ushered in a long period of stability and growth as the hospital became the centerpiece of the community. But by the 1990s, health care was changing and times were tough. SFBH’s future was in jeopardy.  “We began to lose patients to larger hospitals,” said McGinnes.  “We simply could not compete. Because of our relatively small size we had little leverage in negotiating managed care contracts. The viability of our hospital was on our prayer lists.”

Around that time, several local hospitals offered to buy South Florida Baptist Hospital, but the board was concerned that would mean the demise of the hospital—an unacceptable decision after all of the hard work the community had put into building it, McGinnes said.

BayCare On The Horizon
Then in 1996, St. Joseph’s Hospital in Tampa reached out to ask if SFBH might consider joining them in a new venture; a collaboration with the largest not-for-profit hospitals in Tampa Bay.  The new venture turned out to be BayCare Health System, now a model for the country, but at the time, it was a novel concept.

“The idea was that each hospital would keep its own identity but would pledge to work together jointly in a community healthcare alliance,” said McGinnes. “Economically it made sense, but we were concerned about whether we would lose our identity and culture that so many people had worked so hard to achieve.”

After much discussion, the South Florida Baptist Hospital Board of Trustees voted to pursue the opportunity, giving the hospital access to much needed financial capital and the purchasing power found in economies of scale.  But the initial transition period was not always smooth.  “In the early stages of the organization, during a presentation to all of the hospitals, South Florida Baptist Hospital had not been included in any of the projections or discussion,” McGinnes recalled.  “Sister Gladys of St. Joseph’s jumped to our rescue and made it clear how important we were to the new BayCare organization. There was a murmur of approval from the other hospitals in attendance.  That was a turning point. It was a defining moment in the life of South Florida Baptist Hospital.  We knew we were going to have an equal place at the table.”

With the support of the BayCare Health System, South Florida Baptist Hospital began moving forward to modernize its facilities, acquire new high-tech medical equipment and expand services with programs like the Pete Beaty Surgical Center, Jim and Ruby Jean Redman Emergency Center, Steve and Krista Howard Heart and Vascular Center, and our newest Grimes Critical Care Center.  The hospital recruited new physician specialists to join the medical staff and bring the latest advanced procedures to the community.  The SFBH Foundation, which had been established in 1995 under the leadership of Jimmy Redman and Judy Martin, also began to flourish, raising funds for capital projects and reaching out to the community with popular events like Diamonds & Denim and Lights of Love.

“I did not envision just how successful everything would turn out to be,” said McGinnes.  “Over the years, millions of dollars have been spent on facility and equipment upgrades. SFBH is now the largest employer in the city.  Meanwhile, BayCare has set the standard as a successful joint operating agreement between hospitals.” But one abiding principle has remained the same from the beginning—South Florida Baptist Hospital remains ingrained in the community. “We’ve been able to keep the small town culture that is so important to all of us, while delivering healthcare second to none. It’s a wonderful story,” said McGinnes.

The Next 65 Years
What can the community expect as South Florida Baptist Hospital plans for the future? Looking ahead, McGinnes believes the biggest challenge facing SFBH will be the skyrocketing growth expected to occur in East Hillsborough County along the I-4 corridor from Tampa to Orlando.
“Plant City is at the epicenter of this growth,” said McGinnes. “We are becoming a major distribution hub and the city limits are expanding east and south.  As the population grows, the hospital will need to plan for greater demand for healthcare services.  But these are happy problems to have.  It’s an exciting time ahead.”

Karen Kerr, SFBH president, acknowledges the tremendous contribution that hospital team members, physicians, volunteers, board members and donors have made in guiding the hospital’s progress and success over the past 65 years. “We are fortunate to have such a committed group of people who support our goals and provide exceptional service to our patients and our community. South Florida Baptist Hospital has a unique culture of which we are very proud.”