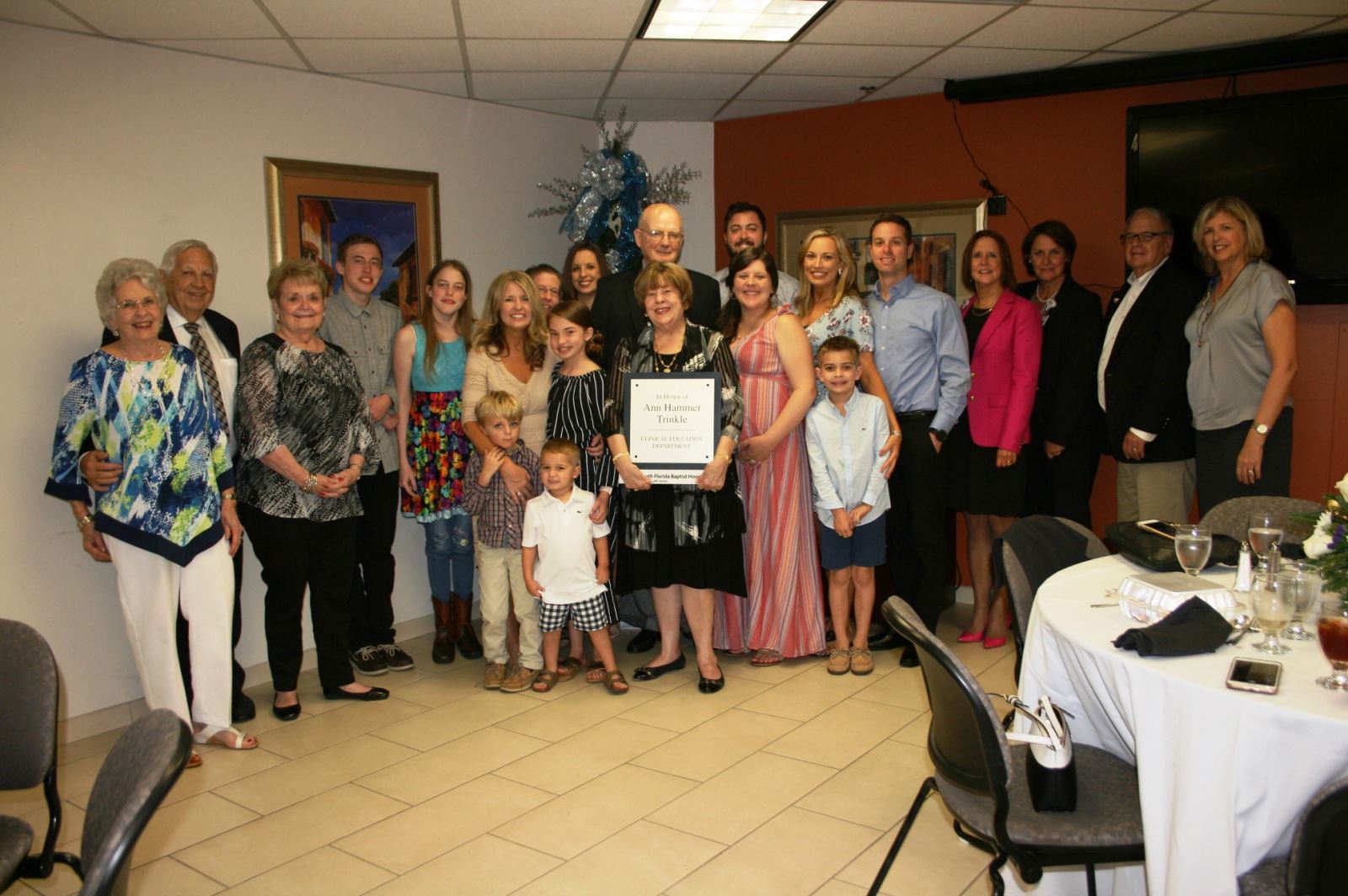 A generous donation from long-time Plant City residents Robert and Ann Trinkle will go a long way toward helping SFBH team members achieve their educational goals. The Trinkle’s $100,000 gift to the SFBH Foundation establishes the Ann Hammer Trinkle Nursing Scholarship in support of team members currently pursuing a baccalaureate or master’s degree in nursing. One team member will be selected to receive a $5,000 scholarship each year for the next 20 years.
In recognition of the Trinkle’s gift, South Florida Baptist Hospital also announced the renaming of the education program for nursing and allied healthcare professionals to the Ann Hammer Trinkle Clinical Education Department.
“We are very grateful for the Trinkle’s gift, “ said Jana Butler, executive director of the SFBH Foundation. “Pursuing an advanced degree can be very expensive and scholarships support the idea of better work-life balance. Many of our team members have families and may need to reduce their work hours in order to accommodate their school schedule. Scholarships can help with living expenses to allow the team member to be successful.”
Linda Baldridge, SFBH director of Clinical Education, agrees. “The Trinkle Scholarship represents a major investment in the success of our team members.  As our team members gain additional knowledge and skills, then our community benefits as well.”
The Trinkles are well known in the Plant City community and have been long-standing supporters of South Florida Baptist Hospital. They both have played a major role in guiding the hospital’s growth over the years and helping establish its reputation as a leading healthcare organization. Robert was a member of the South Florida Baptist Hospital Board of Directors for many years, and Ann served on the SFBH Foundation Board from 1996-2013. She was very active on numerous committees, including the popular Diamonds & Denim.

Surprise Luncheon
The decision to fund a scholarship in Ann’s name was a 50th anniversary gift from her husband Robert—and a complete surprise to Ann.  She learned about it at a special luncheon hosted by the Foundation and Hospital administration on Sunday, December 30.
“It was such an honor to work with Robert to establish the scholarship in Ann’s name and create the luncheon,” said Jana. “We invited their entire family—15 people in total. It was definitely a special moment to see the surprise on Ann’s face when I announced the scholarship.”

Ann jokes that was much more than a surprise—it was a shock, but a wonderful recognition and tribute. ”I thought we were just going for lunch with the SFBH Foundation since I had been on the board for a long time,” said Ann. “I had no idea that the family had been invited. It was a thrill for them to share this event with us.”  The Trinkle’s have four daughters, 10 grandchildren and four great-grandchildren.
Over the years, the Trinkles have supported many SFBH capital campaigns to expand the hospital’s facility and services, but this is the first philanthropic gift focused on education. “Education has always been an important interest for Robert,” said Ann. In addition to South Florida Baptist Hospital, Robert has endowed educational scholarships at a number of Hillsborough County organizations, including Florida Southern College in Lakeland.
“The continued success of South Florida Baptist Hospital is very important to us,” said Ann. “Robert’s father John was instrumental in supporting the hospital back when it was first getting started, and we have continued that tradition. We believe that a good hospital is central to every town, and we are proud to have played a part in making sure that SFBH continues to be a valuable resource for Plant City.”